The historic Tanjung Tuan – also known by its Portuguese name Cape Rachado – is a gazetted forest reserve popular amongst birdwatchers near and far.

The only coastal-forest in Melaka, Tanjung Tuan’s history, environment and geographical location makes it a unique location for hiking and bird watching.

Gazetted as a permanent reserve forest by the Forest Department of Melaka in 1921 (under the title of Cape Rachado Permanent Reserved Forest), Tanjung Tuan is managed by Kumpulan Melaka Bhd., and is situated approximately 20km from Port Dickson.

The main entrance to Tanjung Tuan.

The old virgin coastal-forest contains a rich and diverse population of flora and fauna (177 species of plants and trees have been recorded), and is known to be the ideal ‘pit-stop’ for migratory birds – especially raptors – on the East Asian-Australia Flyway.

It’s also been designated as an Important Bird Area by international non-profit organisation BirdLife International, and a Wildlife Sanctuary by Malaysia’s Department of Wildlife and National Parks (PERHILITAN).

Every year, the Malaysian Nature Society (MNS) organises the Raptor Watch to coincide with the raptors’ journey back to the northern hemisphere via Tanjung Tuan, with the aim of spreading awareness on the conservation of raptors and their habitats.

Walking uphill on the main paved road leads to the iconic Cape Rachado lighthouse – rebuilt in 1863 – and a cliff-top view of the Malacca Straits. The Portuguese established the site after they conquered Melaka in 1511, and the lighthouse was initially built to guide their ships across the Straits.

The Battle of Cape Rachado occurred just off the coast in 1606, and is an important historic site for Melaka. The naval battle between the Dutch-Johor coalition and the Portuguese marked the beginning of a series of conflicts which eventually led to the Portuguese relinquishing control of Melaka in 1641. Several ships were lost during the battle; in 1995, the Dutch ship Nassau was excavated from the area and is on display at Lukut Museum in Port Dickson.

A view of the Cape Rachado lighthouse.

The lighthouse is not accessible to visitors, but a walk around the compound reveals the battle site and a stunning view of the Straits of Malacca.

“We came here because it was said to be ‘photo-worthy’,” says one visitor as she admires the ‘blue lagoon’ with her friends. They discovered Cape Rachado and Tanjung Tuan online after looking for picturesque places to visit in Port Dickson. Birdwatching enthusiasts also note the scenic spot to be excellent for spotting migratory birds.

Signs inside the park educate visitors on the migratory birds that fly through Tanjung Tuan.

Picturesque views of the Straits of Malacca, hidden behind the lighthouse.

The two forest trails near the lighthouse lead to different areas of Tanjung Tuan, while the trail behind the structure descends to a secluded beach where Hang Tuah’s footprint can be found. Following the circuit leads to an old Dutch well, and a wooden staircase brings visitors back uphill, towards the main paved road.

Following the pathway towards the beach will eventually lead to another historic site known as the Mystical Well. Hang Tuah’s footprint can be found by following the stairs by the well.

Following the pathway towards the beach will eventually lead to another historic site known as the Mystical Well. Hang Tuah’s footprint can be found by following the stairs by the well.

The remains of the Old Dutch Well at Tanjung Tuan.

Stairs descending to the beach from Cape Rachado.

A no-frills campsite is also located by the beach and is open to the public. For just RM3, visitors are welcome to camp there, plus camping equipment is available onsite.

The other forest path is located before the lighthouse’s staircase and goes to Bukit Batu Putih; climbing the limestone rocks offers a different view of the ocean.

The view of the Straits of Malacca from the secluded beach.

Camping is allowed for a small fee. The park’s campsite is located near the secluded beach at Tanjung Tuan.

Exploring Tanjung Tuan takes several hours and children and adults of all ages can be seen enjoying the recreational park. Although some paths may be tricky for the very young – and certain elevated pathways may be difficult for those below average fitness – people looking for a ‘forest cleanse’, a dose of history, and a view of the ocean will find them all here.

Source From :http://www.malaysia.my/index.php
Text and photos by Stacy Liu

WITH the Unesco World Heritage Site status under its belt, Malacca is now fast earning the tage ‘City Of Lights’.

The tag is for obvious reasons as anyone who takes a slow drive around the city or a 4km riverboat cruise down the Malacca River just when the sun begins to set would be enchanted by the myriad of illumination at various parts of the city.

Majestic: The Straits Mosque (Masjid Selat) in Pulau Melaka decorated with colourful lights in the evening.

For many locals and tourists alike, the sight of city’s landmarks and historical monuments bathed in reddish hue lights with trees lined with rice light bulbs is a sight to behold.

Popular locations such as the 17th Century Dutch Stadhuys Complex area, Jonker and Heeren Street and the city’s older quarter along parts of the recently rehabilitated and beautified Malacca River are among the brightly lit landmarks.

The idea to light up the city is in line with Chief Minister Datuk Seri Mohd Ali Rustams vision of creating a brighter and more cheerful looking state and city to promote it as the ideal tourist destination.

Chameleon: Besides buildings, some giant trees in Ayer Keroh are also decorated with chasing lights that changes colours every few seconds at night.

“A city that is brightly lit gives it a more cheerful appearance. This can be seen in most major cities around the world that are well-known tourist destinations,” he said, adding that Paris and Singa pore are such good examples.

He also said the effort is in line with the state’s vision of achieving a developed status by 2010.

“Up to 2008, some 87,946 street lamps have been erected across the state, making it one of the most lighted up states in the country.

“We estimate that by 2010, there will be 91,946 street lamps throughout the state. We are not only brightening up the city but also the villages in the outskirts.”

Famous street: The Jonker Street is decorated with red lights at night.

However, this feat comes with a price with the Malacca Historic City Council having to shoulder the bulk of Tenaga Nasional Berhads monthly electricity bill.

Mayor Yusof Jantan said the council pays up to RM800,000 each month or a whopping RM8.4mil per year to light up the city with decorative and street lights.

Despite this, Yusof said that there are plans to further light up strategic locations both within and in the outer limits of the city under the councilsBersih dan Indah slogan.

Bright eyes: The 60m Eye on Malaysia situated next to the Malacca River mouth is also decorated with stunning lights at night.

“One of the locations being looked into is several large trees along the main road next to the World Youth Foundation about 1.5km from the Ayer Keroh toll.

“We have decorated one of the trees with lights and feedback has been very positive so far, he said, adding that effort by the city council to light up the city further depends largely on the availability of budget.

“It takes about RM80,000 to purchase and install the necessary types of lighting for a particular area and this does not include having to pay TNB monthly electricity bills,” he said.

Though the primary aim of lighting up the city maybe for aesthetic reason, he said that there is a dual purpose behind it.

“Besides promoting tourism, better lit streets and roads in the city helps prevent crime,” he said, adding that a study conducted showed that a well-lit area can help reduce crime by 30%. 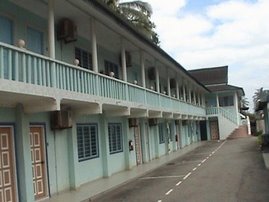