Travel Package and accomodation in Melaka

WITH the Unesco World Heritage Site status under its belt, Malacca is now fast earning the tage ‘City Of Lights’.

The tag is for obvious reasons as anyone who takes a slow drive around the city or a 4km riverboat cruise down the Malacca River just when the sun begins to set would be enchanted by the myriad of illumination at various parts of the city.

Majestic: The Straits Mosque (Masjid Selat) in Pulau Melaka decorated with colourful lights in the evening.

For many locals and tourists alike, the sight of city’s landmarks and historical monuments bathed in reddish hue lights with trees lined with rice light bulbs is a sight to behold.

Popular locations such as the 17th Century Dutch Stadhuys Complex area, Jonker and Heeren Street and the city’s older quarter along parts of the recently rehabilitated and beautified Malacca River are among the brightly lit landmarks.

The idea to light up the city is in line with Chief Minister Datuk Seri Mohd Ali Rustams vision of creating a brighter and more cheerful looking state and city to promote it as the ideal tourist destination.

Chameleon: Besides buildings, some giant trees in Ayer Keroh are also decorated with chasing lights that changes colours every few seconds at night.

“A city that is brightly lit gives it a more cheerful appearance. This can be seen in most major cities around the world that are well-known tourist destinations,” he said, adding that Paris and Singa pore are such good examples.

He also said the effort is in line with the state’s vision of achieving a developed status by 2010.

“Up to 2008, some 87,946 street lamps have been erected across the state, making it one of the most lighted up states in the country.

“We estimate that by 2010, there will be 91,946 street lamps throughout the state. We are not only brightening up the city but also the villages in the outskirts.”

Famous street: The Jonker Street is decorated with red lights at night.

However, this feat comes with a price with the Malacca Historic City Council having to shoulder the bulk of Tenaga Nasional Berhads monthly electricity bill.

Mayor Yusof Jantan said the council pays up to RM800,000 each month or a whopping RM8.4mil per year to light up the city with decorative and street lights.

Despite this, Yusof said that there are plans to further light up strategic locations both within and in the outer limits of the city under the councilsBersih dan Indah slogan.

Bright eyes: The 60m Eye on Malaysia situated next to the Malacca River mouth is also decorated with stunning lights at night.

“One of the locations being looked into is several large trees along the main road next to the World Youth Foundation about 1.5km from the Ayer Keroh toll.

“We have decorated one of the trees with lights and feedback has been very positive so far, he said, adding that effort by the city council to light up the city further depends largely on the availability of budget.

“It takes about RM80,000 to purchase and install the necessary types of lighting for a particular area and this does not include having to pay TNB monthly electricity bills,” he said.

Though the primary aim of lighting up the city maybe for aesthetic reason, he said that there is a dual purpose behind it.

“Besides promoting tourism, better lit streets and roads in the city helps prevent crime,” he said, adding that a study conducted showed that a well-lit area can help reduce crime by 30%. 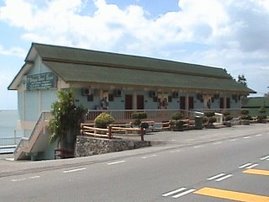